Chapter One – The Apartment

I am hammered and nailed. I am steel and stone. I am hammered and nailed and steel and stone and I stand until perhaps forever. I am where they live. In me are rooms they use. They sleep in one and they live and eat and cook and talk all day long every day the same. They are an old woman and a middle-aged man. I know from things they have said they are Franklin Thompson and his Mother Audrey. Audrey is grey and son Franklin’s head is very, very large. I have seen other men come in and out of the rooms for reasons I do not understand, but I know Franklin’s head is too large because all the other men’s heads are very, very small, as is Audrey’s.  At certain times of day, they sit at a table in the eating and cooking room and they talk and talk away back and forth.

Do you like the soup? she says—I made it from scratch this time. How is it? Is it good?

Very, very complicated, she answers. I don’t know that I can really explain.

I am around them, and I wonder; why doesn’t he ask the soup? The soup would know how it was made, the same way I know how I was made, with all the hammering nailing shouting and pushing and shoving all day after day after day long ago.

I could show you the recipe later, I could, she says. You could look at that.

As I watch them eat I remember when there once were three of them.  An old man named George lived with them and he slept in the bed with Audrey. But a day came that turned out to be the last day. He didn’t get out of bed, and Franklin and Audrey scurried around and waited and scurried around and waited, and then men in red came and put George on something with wheels and disappeared out my door. George never came back. That is odd. Sometimes Franklin disappears out my door and Audrey too, but they always come back, in one kind of shape or the other, and go on. But George is still someplace else. I don’t know what’s past my door. Might as well be nothing, because I can never go there. George is gone, but Franklin and Audrey still live in me, so I still have a purpose. After they both leave for the last time, though, what will be next? I have to wait for that to happen to know what will be next. Next things always happen if you wait long enough.  To wait and watch is all I have to do. That’s simple enough. I’m content.

I need to go to the bathroom, Franklin, says Audrey after a while.  Stay put you know, Franklin, you should always stay put, not like all the other times. This time stay put and don’t go looking.

She rose and went to the door and disappeared.  Now get this; get this. Any time she disappears he stops what he may be doing and freezes. He waits. He does nothing as he waits. It is as though the soup does not exist for him anymore. It is as though the spoon does not exist for him anymore. Things are all wrong for him somehow—but almost every time, if he waits long enough, she comes back in the door.  He explodes with joy; she explodes with joy.

Oh my God thank God I have found you Franklin I thought you were lost forever.

Yes Mom—I, I was so scared, so scared, of how I would be able to live without you.

They embrace a long time and continue to say things like this, until finally they get quiet and return to their seats and go back to what they were doing before she left, as though nothing has happened. If Franklin is the one to leave the room, Audrey acts the same as he had, and when he returns, they behave the same way. This is them, to me. This is just how people seem to be. I don’t need to understand. When they are out of me, I don’t care, because I don’t know what’s outside. Might be nothing there at all; embedded in miles of solid rock, I may be.

But sometimes, Audrey does not return quickly enough. Franklin sits and waits, and sits and waits, and when something in him tells him the time has come, he abruptly rises, rushes into the bedroom, and gets a small object off the dresser. What the object is, I cannot see, because it is too small. It glints of silver though, it does; just a glint, and then it is in his pocket. Then he rushes to the kitchen door and goes and leaves me with no one inside. This does not often happen, but when it does happen, my purpose becomes to wait. I know that if I am forced to wait long enough my purpose will disappear. What will happen then, I do not know.

But that has never happened; I am always very glad, yes very glad, when one or both of them return. And today, it is Audrey who returns first. As always when she sees Franklin is gone she looks around and runs to the bedroom, and looks around, and then drops to her knees and buries her face in her hands and makes sounds up and down, up and down, for a long time. I don’t know for how long a time because I don’t measure out time. It’s just somehow longer and shorter every time. If he doesn’t come back fast enough, like this time right now, she gets up and picks up a black book from a little table built into my wall. With the book she goes and stands at the first of fourteen objects she long ago hung around my walls. I think these objects are little windows looking out at something, which from my vantage point I cannot see, because she says words through the objects like they’re little windows with someone to talk to on the other side. I don’t get the words. They’re odd words about things I don’t know. But that is all right. And I don’t care about the little windows. As long as nothing comes into me from them to hurt me I don’t care that they are there. She stays there like that, and after a while, she moves to the second object hung on the wall, and does the same; and again and again and again around the walls until she has covered all fourteen of these windows.  Once in a while she glances to the door, but just for tiny bursts of time at a time. Now, sometimes he comes back when she gets to window number five, or six, or seven or whatever. When that happens, there is rejoicing. But that is for later; but now, now is now, it’s a new time today, and again has begun for the very first time. She is alone with her windows, and he is gone. It’s a nice time in me. It’s an in between things time. It is somehow warmer and calmer in me to not have their chatter chattering back and forth and their stinky cooking and eating. It’s the time I love the best; dead, dissolute, and hazy in a way, but still healthy in a way.  It must be me sleeping. For them there’s night and day and waking and sleeping. Yes, I’m probably asleep now and dreaming of Audrey and her fourteen windows. If Franklin will ever come back I don’t know. I never know, nor do I ever care. Why torment oneself with care when you have no control? He always comes back, but if this is the time that he finally does not, I’ll have died in my sleep peacefully, like anything ever born ends up wishing to finally do.Type your paragraph here. 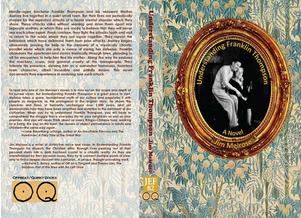