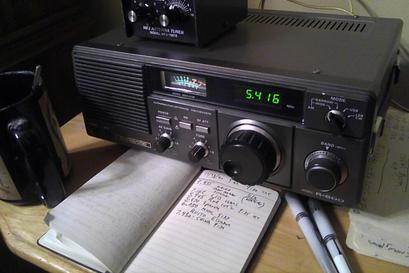 Around 1960-61, Uncle Albert was going to take a giant worn-out console Record Player/AM/FM/SW 1940s monstrosity to the dump. Dad, who was an electrician and a general nut for all things electrical, stopped him, took the radio out before the console got trashed, put it in a makeshift cabinet, and we started to listen. That was how the whole thing started. A neat thing about the radio was it had one of those old spooky green “magic eye” tubes to aid in tuning. What could be cooler for a kid to play with? Plus, being able to hear all of what was sounded like cool “weird stuff” on shortwave, was addictive for a kid. After a year or two we got a Heathkit GR-91 as a gift and assembled it. Then followed several years and many many hours listening and logging and having fun with it. The peak of the sunspot cycle was approaching then, so as can be imaagined, it was amazing. That made the GR-91 a pretty “hot” radio (although in that decade the high sunspots made most every radio “hot”) but it had one flaw that was really bad. The tuning dial was not even close to accurate. It was even taken for a professional alignment, in vain. The dial only gave a ballpark idea (Imagine the hugest ballpark in creation) of what frequency had been tuned.

The next problem with the GR-91 was, that as you tuned up past around 14 Mhz, a hum began and grew to where there was no point trying to listen at all for anything all the way up to 30 Mhz. Gradually it became the easiest thing to concentrate on 20 meter amateur radio listening. The GR-91 handled SSB well, helped by its BFO control and great bandspread tuning. From about 1964 to 1968, it pulled in hams from over 250 ARRL countries. These were mostly on 20 meters, using a dipole. Use of this radio went on until mid-1971. Then, more important things took precedence, and the set was put away.

Around 2004, time again became available for listening. An old Hammarlund HQ-180 was purchased and listening resumed, but the near-bottomed out sunspot cycle, plus the HQ-180 proved to be too complicated and difficult to use. The set also was not in the best shape. So, after a few months, the set was sold, and radio listening was put aside.

Then, early in 2020, time was again found for listening, so, a Kenwood r-600 was obtained. A good  antenna was put up, and this time, things were different. The R-600 proved to be incredible. The reception is crystal-clear across all bands. Plus the digital dial can be trusted to read out the exact frequency being heard. As far as DX, even with today’s low sunspots, the whole world can be heard. Most DX does not “boom in”, as they say, but is more than audible in most cases. The key is to know when, where, and how to listen.

Lastly, besides the better technology of the radio, imagine the difference between now and the ‘60s, when there was no internet, no computers, and practically no reliable hard copy directories to be found. At least with ham radio listening, it was easy to ID what country was on, because of the standardized call sign prefixes. But, for broadcast stations, the only real way to identify the more “exotic” non-english language stations, was by listening, sometimes for hours, hoping to catch some clue, ideally some recognizable station ID. More often than not, this would never come before the station went off-air, or faded out. Today, with online directories, that is not such a problem. But, imagine how, with the GR-91, being unable to provide even approximate frequency readings, that even the modern online directories would have been practically useless. 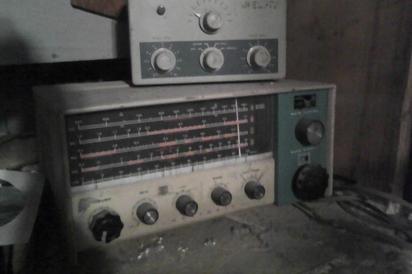