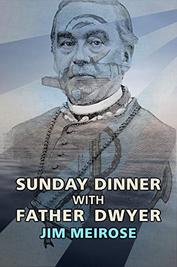 (From Chapter Seven–Banter on the Ship to China III)

When Skip scraped his hand bloody, far out on deck, Father Dwyer had just begun episode nine hundred, and sang the praises of the sweetmeats et cetera that lay spread before him on the massively expensive studio battleship-kitchen-sized stainless-steel worktable before him.

So, he crowed, See! Eighty, yes eighty, perfectly filleted dead ten-days-old perch. And not a smell to be found. No. And next, here! A stunning array of seven green moldy raw dried-up old pork tenderloins. After all, you know, it has been scientifically proven that moldy food is actually good for you. Like, take bread, he said, slamming the flat of his fat hand on the steel, The bread I buy, I actually will not use until it has begun sprouting those nice little dark green spots on its dampest parts; my mouth waters—see? And he pointed to his gaping mouth full of darkness supported by some blood red thing that might have been a tongue, and then he put both hands flat on the steel, and mouthed, And my perfect teeth? Did you see my perfect teeth? I never get any problems with my teeth, having lifelong eaten the food I do on this show live, before you, true and unhidden. Teeth, you see, and he looked around as though he did not want anyone out of sight in the studio to hear, before looking right through the screen in a very intimate and sincere way, so close you could imagine the pores of his fleshy face, saying, Teeth decay naturally over time. Everything on earth, as a matter of fact, decays naturally over time. Even the earth itself, the solar system, the universe, yes—even eternity decays naturally over time, except eternity, being eternity, will go on to decay more and more forever and ever, you know. This is actually the reason why division by zero is deemed impossible and why you can run Pi out an eternal number of digits, but—

And, with that but, he jabbed a large butcher knife into the air, and said slowly, We are not here though, to discuss eternity; that would need to go on eternally, to be done right and true, so, we’re given this mere half hour to cook, and—cook we will, people—cook we will, and he swept the knife over the remaining foods, saying very, very quickly, as disclaimers and cover-your-ass words are said impossibly swiftly after radio commercials for anything that’s about investing money, or about getting rich quick, or about making tens of thousands a month working from home, Everything here, of course, will be seasoned, with fresh thyme and garlic, but, the acorn squash candied with butter, pecans and brown sugar, unfortunately will not be available except upon special circumstances, and the baked potatoes rice and broccoli with cheese sauce shown on the show is not guaranteed to come onto all your plates either, and; and the homemade pineapple upside-down cake shown on the show may not be at all times available. But, never mind that. Let’s go, let’s start! Let’s start with the dead fish, let’s do! And he seized the first fillet, and spun around nearly losing his birretta and sending flying his ecclesiastical collar, and slammed the oily corpse into a frying pan, causing boiling clouds of steam to erupt and a dizzying sizzling sound to overwhelm the studio sound system. People behind the scenes jumped from their folding-chair slumber to readjust the controls. We must readjust the controls! Must readjust the controls, must—it got so intense backstage, off camera. Such a crisis, yes; such!

Countless levels of deep below Skip, Noman went on with his chore of spraying rustproofing solvent on the hard-as-rock walls, also deeply daydreaming to the rhythm of the scraping of the steel. Should I have left, he thought, before she came back with the Schlitz I said I wanted? Should I not have waited so long for her to bring the beer? Should I just have decided she was all talk and no substance? I believe that she is just all bogus. Why would somebody like her want someone like me? Way back when I was only eighteen? But, he thought much too long and much too deeply, as he sat pimply and red-faced, sitting on the bowling-alley snack-bar-counter stool way back inside.

Scraping and scraping and scraping and scraping and scrape, the rough drone made him think that, Now, here’s where I should have got up and left. Here’s where, if I had done nothing, everything would be completely different, no worries about any wife’s health, maybe even having gone down another whole path and never stepped aboard any huge too-huge big-jelly of a containership, down buried in this silent steel box every day, with just me, myself, and all my regrets—will she come bring the Schlitz, should she come with the Schlitz, should I go—But all at once he was solidly struck from behind by a baseball bat and came to himself in the tiny steel compartment, deep down below. His hand moved scraping down just one of the thousands of identical walls of the boxes in the belly of The Dakota Maru. Bound for Shanghai, you bet, you do. You bet—his head turned, and back in the bowling alley again, he saw.

Here she comes around the corner, with two tall bottles of Schlitz—but why two, hey, why, he ordered just one, what gives, hey you—

Here you go, she said brightly red-lipped and toothy—and also, you know, guess what?

She slid onto the big soft stool next to his and said, What’s what is—like I said before—this is on the house. On me, actually. They don’t give this good shit away.

Why are you buying me a beer? he said, palming one bottle that stood ice cold, wet, tall, and foaming. He poured it into the icy glass as she told him.

Because, I’ve been watching you, and, I think you’re cuter than shit. And you’re the new guy, so, anyway, it’s my breaktime, too. Ain’t that a rip? Think I’ll spend breaktime with you every single day—here!

She held the bottle up toward him and he gently clashed his bottle into hers, and with her smile, she said, Here’s to us, Pal. I can see it. I can really see it. So, aside, with that she paused to pour, and the black beer rose, and the big white head exploded, it seemed, with pure white beer flowing over in foam and more foam, and the very head itself joked to itself, I am very cute, smiling and proud to at last have been delivered to someone. It was dark and horrid in the case, just one of hundreds just like me, in the truck that I rode from the beer factory, in the case and cases piled with hundreds of identical bottles, so—why did this one, I, me, the true one, be in his hand all foaming with this guy watching the waitress busily and abruptly chugging down half the tall glass.

The tip of the bottle was foamed up white, and he came at her saying, So…

What is your name honey?

Why is my name funny? she said, as it began behind his forehead boneplate.

Silently behind his lips the answer formed, Phyllis, Phallus. Phyllis, Phallus—should she know what I’m thinking? Sure, what the hell! Everything in him paused and focused on Phyllis. He took her in from head to toe, did some mental calculations, and somehow got lost in all the flingflying numbers, so he lost control and his mouth opened and the answer to her question came right out on and over the marble bar, saying to her waiting eyes, I think your name’s funny because Phyllis, Phallus, and Phyllis Phallus, like that you know, like that. Phyllis and Phallus are just two letters different. Two vowels, to be exact. Almost the same damned word. You know?

There, yes, I do! I totally get it! she said, pointing—I knew it, I knew. You’re a thinking, walking, talking, dirty-minded but nearly a genius, fucking true man.

Haw! Phyllis and Phallus fit together so well, maybe they’d do a nice word-fuck, he thought bright-eyed, saying, No, I am no genius, no, I—

The bat slammed him wide awake in the steel ship’s compartment. The cleaning solvent smell formed into a man built like a giant blue genie, up behind him, who slammed the bat down on Noman’s brain again, and again, plugging him back to full attention to his life-socket spot that most people think is their job.

Where’d she go, where? And then he realized the genie had made him rise, and turn, and walk to get far from her. As for her, she just forgot and rose and tossed both Schlitzes onto the bar for someone else to clean up later, pour out, dump out, clear out, never was.

Now, Noman knew that for a while, the torment following him everywhere was erased for a while, at least. He would arrive in China alone, as it should be, not followed by the terrifying fiery wall of guilt she had become and pursued him, married him, and all the rest, gradually, since that day. Relieved, he kept scraping the gutwalls of the Dakota Maru, all in the here and now; up, down, up down, spray, look, okay, then up, down, spray look, okay—but she came out of the steel and asked him, You there. I never got your name. What have you ended up doing for a living?

Noman explained in great detail all he had done and was since that day at the bowling alley when he’d turned from her, and as he scraped, up and down, up and down, he told her; it was safe to tell all of anything to someone who wasn’t there.

Out at sea all the time? Doing that shit work? That’s a hell of a job to have, said Phyllis. But hey, listen—look what I got today on the way in, look, do you think this would be a good birthday present for my Grandfather? Here, wait—and she rummaged around someplace in her clothes that all of a sudden became unnecessarily voluminous, flowing, and gownlike, and held out to him a wooden set of Soviet-Union-Leader nested dolls. The largest was a man with a gigantic birthmark at his bald hairline, whose name Noman couldn’t remember. Oh, he said, as she deftly took apart the nested dolls and the Soviet leaders stood on the counter, largest to smallest, bathing in the gently hard but soft roll after roll of the distant bowling balls, each roll ending with a sharp sloppy crash of large hard bowling pins all scattered, making her pick up her Schlitz and say, Well, what do you think? Pretty cool eh? Russians, you see. Cool.