Let me know what’s your take off this No.

Then it’s not clear Cannon.

Then in the airsuck before a big outblow sounding like, I worked in Remco spending the middle years while you were coming on Sonboy. Coming on past the first time you got dropped off at the start of the sidewalk leading up away from the road we pulled over. It was two days for you it was the first day in the red house. You know up until this very far day no one has believed the fact that you actually started the regimented phase of your life on going up that walk into the door of an actual real-life no pretty poem style but quite very very real little red schoolhouse. So there you went walking away to your next thing just like you would walk away to school numbers two through seven and. That is all I believe for schools like that one more after more into another ‘til they shot you out the back end into the. The. The next thing you got cut into like that like a woodworker deftly cutting in at exactly thirty-three degrees but but eh; I could not afford spinning ‘round that entire cyclonic swirl-pop of a pattern because when you left the car the next thing came over me the next wave got to get ready that last nearly drowned us before the next comes let’s stumble closer to the shore. Feel that current way down sucking you back well well it’s sucking me back and little Sonboy there back gee see the undertow’s mind is too dark to see. Sonboy is barely walking on his first steps and the undertow given the chance will take him down. Me down the car pulled off to the first stop sign the law seems everywhere it’s a sign of fine societal design that the law is everywhere given the chance will take you and me too—yet this society seems no way ‘wellian. As they say. I could ‘o run that stop sign because no one there to see or catch me and the  next stop sign that might be a simple fact of looking over a case of lettuce heads for sale that stop can’t take if no money stop stop can’t take if money but no intention to pay stop stop stop as the same deal as see that sign slid by this short cardrive we’re on it yells in black big blocky written fact symbology forty-five but. No could actually be any number from one to maybe a hundred fifty or so but that’s the number says you got to pay for that lettuce you got to stop at those stop signs you can’t scream down your gut thrust into your foot and flatten down the pedal. Thus speeding your vehicle to either get there faster or maybe not get there at all yah maybe not even being here sitting here right now laying you down in this coffining idea so—this was how I occupied my  fancy after dropping you where the law says you must daily attend one or the other stripe of the same place and only can file for release no strings attached until, in this state, you reach the age of sixteen.

The car stopped in a big flat black top-lot and the door stood way out front from itself so it was a walk needing to be walked and in the within of the large bland Remco factory the door came back over gone; the timecard clocker thunk-clunked to the side at each push one by one of the line of the shift workers and; the floor flowed under arriving at the Remco toy corporation assembly line at the very crack of eight. Standing all duncy at the paved yellow conveyor each paving stone when nearing being. Small plastic planes slowly righting then lefting and in the middle, from a bin of red rubbertips out the back side but possible to fairly easy to reach to perform the following task over and again for the remains of the day which shrank by one planebody successfully red-tipped for safety’s sake because the law again which is everywhere says, these children’s toys simulating war cannonguns flight-capable flyplanes or what have you here let us keep this simple—any kind of dart must be bluntly red-rubbertipped or you, or you, or you and you and you cannot offer it for sale, score a successful sale of it, or not caution the buyer that once the toy’s home the rubber cannot become lost or missing in this country before now or ever after—so—in this muse-space flow up my head, this being just a sample of what terrors may lie around the next corner, fear of which the creator has mercifully muzzled down tight in us because God does not condemn the innocent to lives or fear unless there’s some good reason. These reasons are exactly nineteen in number but no more can be said because that yes that that whole entire record of why is forever sealed down some savior’s secret space. But anybut.

The idea of obtaining a position in Remco came from the following exchange. This will not be presented verbatim, since the state of the art of recording back that pop was unterrificably off from birdie-par. The coursewise coming out got effectively set after unmasking the rule hidden until then and since all hidden again so worth restating; stay close to known storehouses of what coming down to being shortly needed and this meant you, Sonboy. Your age was advancing fast meaning each Christmastime birthday rite of passage ritual day or any occasion at all to be activated when approached as governed by Los Blowensteen’s accounting super-rule number eighty-eight, whichwise states so obviously as to be open to parody, Be ready. Have money. Stay close. Be on time. Do your best and best over best ah—and your Father drummed into me and by default us due to the fact of your blooming immaturity, I was, piece by piece, part by part obtaining for you a radar rocket cannon toy eh piece by piece taped on my inner thighs hey hey spirited out the Remco factory hey and once home slid in a big box bottom in that backroom you never go in hey isn’t it true that there’s always at least one room in every dwelling which each member of the pack calling that dwelling home never goes into and—yes my sweet yes my fine, eh my hippo—it’s a different room for every pack member and more amazing yet uh uh no one of their number ever talk about it and it is almost the case they don’t even know that it’s true because never going in each one’s particular shunned space is not something thought about or decided but something. That one just does. Something that just happens; so, once that box safe and secret in that room has received the final component part of the desired radar rocket cannon I became free to finally shit off the scratch-pot of my crappy job and the rest of the job transferred to your Father as though just like smooth fast sleek runners passing off a precious baton. And with the precision which every professionally-planned out enterprise so effortlessly exhibits, inventory was taken of the contents of the passed over baton which rolled over and open to a lengthy scroll we followed down the penciled in list within the items being ah being an yes con hippo man they being all in this exact order—which we admit is a bit different than the same exact items would be ordered in by most others but it is in our uniqueness lies our charm—so; big base cannongun barrel cannongun swivlin’ bass twirlyround superswell Johnsonstyle tight ass radarscreen uh uh mystically made deep circuit board fat ass grilled over talky-mike headphone and headphone skullclamp sleek slick sweptwing flyplane wit’ red rubbery tip tip; tip. Uh. And the not included dual D batteries Shop-Rite brand and yellow stamps coupon book tossed in for some measure. And finally size XL big tall-man’s slacksfull of swarming green gillfish—for the confusion of any Remco espionageers which may clap by seeking the bottom of this petty but still true thievery. 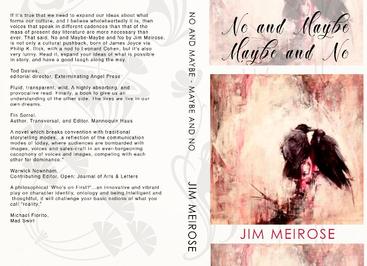 Sample from "No and Maybe - Maybe and No"  (Pski's Porch)