The Leader's mouth opened and let out words.

The bushes moved. The leaves rustled.

Their fingers rested on the triggers.  They peered around their firearms, but saw no one.  Just a tangled wall of leaves.  But the bushes had moved.  The leaves had rustled.

The gunbarrels remained pointed at the woods, in case any faces showed.


They walked down the long hill, watching, weapons at the ready.  Darkness drifted up from the ground and by degrees enfolded them.  There had been nothing in the bushes before-- nothing.  The ground they walked grew sandier and rockier and the scrub brush they passed was stunted and withered.

How much further until we are there, one called out toward The Leader.

What will we find there?

They kept on down the hill, the loose rocks underfoot tumbling along before them.

Don't worry, said The Leader.  There will be plenty of good hunting down there.

I hope so, said the one just behind.  He hefted his semiautomatic.

I hope so too, said another.

The Leader half-turned to them without breaking stride. I said don't worry.  Don't you know how to do as you're told?  You were told not to worry.

Slowly the slope flattened as they went on.  The darkness coming up thickening before them prevented them from seeing what lay at the bottom of the slope.


c. let them have it

At the bottom of the slope the pitch black gave way to a great open field;  and in the field, naked ones ran to escape swarms of gnats and other insects that came up from the damp long grass, and to pursue those of the other kind, the ones with long streamers trailing out behind them.

All right, said The Leader.  Open fire.  Let them have it.

They sent bullets out and the bullets went into the runners and some of the runners screamed and clutched at their gunshot wounds and some others of them fell dead.  The great mass of them however continued running to escape the insects and to catch the ones of the other kind.

Keep firing!  Get them all!

The Leader and his men sent a hail of bullets out into the field for a long time and when all of the creatures in the field lay dead The Leader called out again to his troop.

They put their weapons up and walked across the field following the leader, here and there kicking at the bloody dead lying in the field, here and there administering coups de grace to those still living, twisting and writhing and bleeding blasted open gutshot on the ground.

At the far side of the field they started out onto a long curving hard packed dirt path between tall walls of brush, The Leader holding his weapon at the ready, as did all the others, ready for anything.  They meant business. 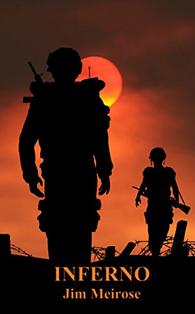